Irvinestown was in the Barony of Lurg and was the 116th Poor Law Union in Ireland. The workhouse was situated in Reihill Park in the town. The inscription stone (1841) is now incorporated into the arch going up to the enclosed area. The surrounding stone wall is all that remains from this period.

John Porter and Rose Cawden were the first inmates to enter the workhouse on 15 October 1845. John, of no fixed abode but originally from Kesh was 75 years old, he was married but had been deserted by his wife. He was a beggar and described as “tolerably clean.” Rose was 55 years of age and a beggar from Largy, Lack.

Food was inferior to that of other unions and in 1846 a typical adult’s food for a day was 7oz oatmeal for breakfast, 8oz oatmeal for dinner while no supper was offered. Each inmate was allowed half a pint of buttermilk for breakfast and dinner.

Irvinestown was described in July 1847 by Dr Phelan, the medical inspector to the Poor Law Commissioners as the “worst” he has seen in the north of Ireland. He referred to patients lying on the bare floor with scarcely enough straw under them and being in a filthy state. 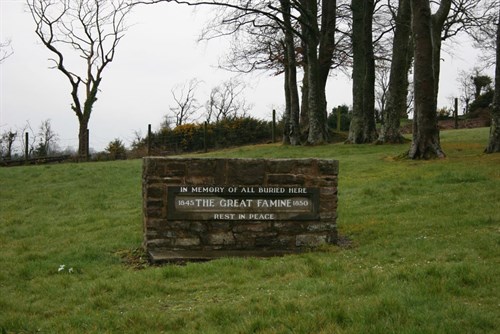 Famine Graveyard
Given of the large numbers of inmates dying it was resolved by the Board of Guardians on 13 January 1847 that a portion of the workhouse ground should be ditched in as a burial ground for the paupers. There was no spare ground available in the public graveyard beside the town clock. A man was employed to act as sexton in making graves and was paid one shilling a day.
For one hundred and fifty years this rough field has been known locally as the “Paupers”, as in Enniskillen Graveyard. No stone marked the graves of those who died so tragically during the Great Hunger of 1847. At a public meeting in the town in 1996 it was resolved to erect a memorial on this site in memory of those who suffered and died as a result of the famine 1845 to 1850. The field was to be known as the Famine Graveyard.

On Saturday 4th October 1997 the famine memorial stone was unveiled by Sarah and Michael McCaffrey from Creeslough, County Donegal. They were direct descendants of a family from the area who drowned in 1847 in a shipwreck off the Isle of Islay, Scotland whilst making their way to the New World. The central memorial cut limestone came from the derelict Magheramena Castle near Belleek and a time capsule with artefacts from the famine period and contemporary 20th century items were placed in the memorial.