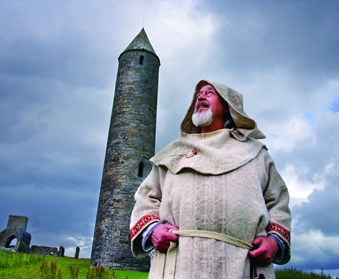 Explore the Maguire Story through our online resources.

Gaelic Fermanagh was ruled by the Maguire chieftains.

Their rule lasted for over 300 years from the end of the 13th century to the beginning of the 17th century.

At first the Maguires ruled from the south of Fermanagh in Lisnaskea.

In the early 15th century, one of the junior branch of the Maguires, Hugh 'the Hospitable' Maguire, established a second stronghold at Enniskillen.

The exact date of the building of Enniskillen Castle is not recorded.

Hugh 'the Hospitable' Maguire died in 1428 after returning to Ireland from pilgrimage in Spain.  The Castle must have been built before then, sometime during the 1420s.

The earliest known reference to Enniskillen Castle occurs in the Annals of Ulster in 1439.

The text refers to King Tomas Óg Maguire being held prisoner at his own castle in Enniskillen by Domnall Maguire ‘the Freckled’.